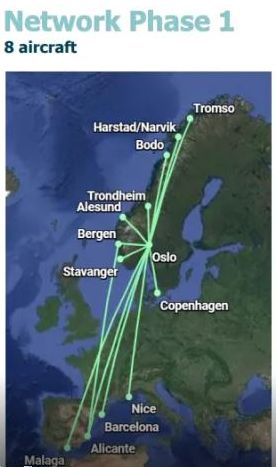 Flyr’s launch network will consist of five domestic and three international routes from Norway’s capital Oslo (OSL), with the carrier’s inaugural flight set to take off before the end of the month.

The airline, backed by industry veteran Erik Braathen, plans to begin commercial service with flights to Tromsø operating up to 19 weekly services from 30 June.

International services are planned from 21 August connecting Oslo with Alicante and Malaga (Spain), alongside Nice (France). No UK destinations as yet.

In a statement, Flyr said its first Boeing 737-800 would arrive in Norway “soon” and the operating licence would be in place “well before” 30 June. “The company will expand the number of aircraft and destinations in line with demand,” the carrier added.