With the future still uncertain regarding overseas air travel Business Travel News looks at Britain’s regional coastlines with the help of the National Coastal Tourism Academy.  There are some extraordinary outdoor places to see and explore. 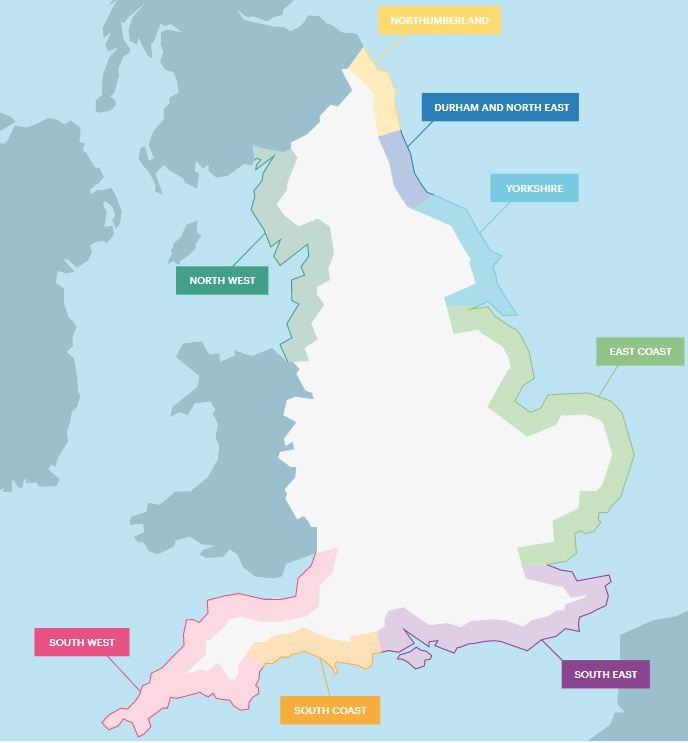 Over the coming weeks we plan to deliver some ideas of what to book for later on in the year.  This is a starter.  Scotland, Wales and Northern Ireland will follow.

“The coastline of England can rival that of any on the planet for sheer diversity, cultural heritage and captivating beauty,” says Samantha Richardson, director, National Coastal Tourism Academy, which delivers the England’s Coast project.

“No matter where you live, this is the year to explore locally. Take in dramatic views across the cliff-tops, explore charming harbour towns and family-friendly resorts like Blackpool, Scarborough, Brighton, Margate or Bournemouth.

“Or experience culture on England’s Creative Coast in the South East; wherever you visit, you are guaranteed to discover something new. Walk a stretch of the England Coast Path, enjoy world-class seafood or gaze at the Dark Skies in our National Parks near to the coast; England’s Coast re-energises and inspires, just when we need it most.”

The coastal Lake District doesn’t get as much attention as its better-known inland areas, but is one of the most scenic coastal areas in Britain. Choose your base in the Park’s only coastal village, medieval Ravenglass, and explore the famous Eskdale narrow gauge railway, 13th century Muncaster Castle, and stunning St Bees beach, all nearby. Stay at Pennington Hotel in Ravenglass from £119 per night.

In Blackpool, the Art B&B hotel and venue, designed by 30 contemporary artists, boasts sensational sea views, rainfall showers and its seafront ART cocktail bar. In Morecambe, the iconic Midland Hotel is a wonderfully-restored 4-star Art Deco hotel with gorgeous bay views – once the haunt of Coco Chanel and Noel Coward.

Liverpool is heart of the North West and 100 years ago was the gateway to North America.  Plenty of heritage to see and also journey back to the origins of a local band taking in the award-winning Beatles Story permanent exhibition, and world-class contemporary art, restaurants and museums at the city’s vibrant waterfront.

The Lumière Light Festival returns to Durham, 18-21 November 2021.  The festival invites local and international artists to design illuminations which will transform the city’s urban spaces and familiar public buildings. Stay at 5-star hotel & spa Seaham Hall on the Durham Heritage Coast from £315 per night.

A new coastal hub and café for Crimdon Dene, Hartlepool: This new community hub, educational area and café is set to open in the summer. Enjoy the wide sandy beach and scenic views towards Hartlepool and the Cleveland Hills, along with the colony of breeding little terns migrating from West Africa each summer. Stay at Crimdon Dene Holiday Park from £56 per person per night.

There is so much to explore at Castle Eden Dene, one of the most important areas of woodland in the North of England and an example of the ‘wildwood’ that once covered most of Britain. This ancient deep gorge is home to an extraordinary variety of birds, more than 450 species of plants, and mammals such as roe deer and fox.

At the north of the county lies Ross, part of the Lindisfarne Nature Reserve, and where the Sutherland family today farm their ‘Lindisfarne’ Pacific Oysters. The world-famous Craster kipper is smoked in Northumberland at L Robson and Sons smokehouse and, further up the coast in Seahouses, is Swallowfish – another excellent smokehouse which has been in business since 1843.

Harwich has strong connections with the Pilgrim fathers where the Mayflower’s captain, Christopher Jones, lived and was twice wed. Visitors can explore the recently-restored Christopher Jones House on King’s Head Street, where the captain once resided the Mayflower Visitor Centre, Esplanade Hall – a former school and the fascinating Mayflower Trail – a 1km tour of the city’s links with the Pilgrim Fathers.

At Sutton Hoo visit site of the new Netflix period drama, The Dig.  This new drama – starring Carey Mulligan and Ralph Fiennes – tells the story of Sutton Hoo, the 245-acre estate near Woodbridge, Suffolk, that was home to one of England’s most important archaeological discoveries, where 18 burial sites dating from the 7th century AD were found. Visitors can marvel at the full-size sculpture of the 27-metre long burial ship and explore the burial grounds and a new exhibition. Make it a long weekend, staying at The Crown at Woodbridge, a luxurious 16th century historic hotel and restaurant.

Who says you need to go inside a gallery or a museum to get your culture fix, when you can take in public art outside in the fresh coastal air? On 22 May, artist Katrina Palmer’s Hello and Retreat installation in partnership with Metal will be launched in Southend-on Sea.

On Aldeburgh Beach, Suffolk, local artist Maggi Hambling created the iconic Scallop sculpture in 2003, and the Aldeburgh Beach Lookout is a tiny art temple by the sea which has become an international art destination, with regular new artists in residence. Structures on the Edge, Lincolnshire, is a series of coastal art installations along a 10-mile stretch from Chapel St Leonards to Mablethorpe.

With the recent news that the white-tailed eagle may be reintroduced to Norfolk, celebrate the region’s abundant birdlife: A consultation has been launched to reintroduce Britain’s biggest bird of prey to the Norfolk coast. The impressive eagle was hunted to extinction in England 240 years ago. While approval from Natural England is awaited, head to one of Norfolk or Lincolnshire’s fantastic birding areas for a spot of twitching. At Gibraltar Point National Nature Reserve, in Skegness, spot waders, little terns, skylarks, and snow bunting; in the Norfolk Broads, witness grey herons, coots, and spoonbills; and, at Holkham National Nature Reserve, see pink-footed geese, barn owls and grey plovers.

Recently the sixth region in the UK to be named a UNESCO Biosphere Reserve, nature thrives on the idyllic Isle of Wight. Look to the wildlife of the past as you comb beaches for signs of prehistoric life – it has more dinosaur remains than anywhere in northern Europe. In August 2020, dinosaur remains found on Compton Bay by the University of Southampton were discovered to belong to a new species of dinosaur – the Vectaerovenator inopinatus – from the same family as the infamous T Rex. Join Felicity the Fossil Guide on Brook Beach on a two-hour expert-guided fossil hunt.

2021 is expected to see the launch of the Creative Coast, a new cultural experience fusing art and landscape, and the world’s first art Geo-tour, from May-November. Margate celebrates the 10th anniversary of the Turner Gallery with new exhibitions from Steve McQueen and Barbara Walker, the bicentennial of Keats’ death, 10-year extension of Antony Gormley’s “Another Time” sculpture, and the opening of a new Crab Museum. Broadstairs, meanwhile, sees the launch of a Dickens-themed holiday cottage, Fagin’s Cottage.

A warm welcome to walkers in White Cliffs Country: Taking its name from Dover’s iconic chalk coastline, a walk-through White Cliffs Country will be a tonic to enjoy post-lockdown, with its huge variety of coastal and countryside routes with stunning panoramic views. From 26-31 August 2021, it hosts the White Cliffs Walking Festival.

Recently named Britain’s Happiest Place to Live, the beautiful Cornish town of St Ives is famous for its Blue Flag beaches, surfing scene and artistic community. In June, world leaders – including new US President Joe Biden – will gather nearby at Carbis Bay for the G7 Summit, with Visit Cornwall estimating it could provide Cornwall with a £50m economic boost.  (See BTN 25 January.)

The longest National Trail in the UK, the 630-mile-long South West Coast Path begins at Minehead in Somerset and runs along the coastline of Exmoor, North Devon, Cornwall, South Devon and Dorset, ending at Poole Harbour. On average, it takes 7-8 weeks to complete, although some have done it much faster – the current record is just over 10 days! Why not take on the challenge later this year and explore some of the world’s most beautiful coastline at your own pace?

Find peace and tranquillity on Exmoor National Park, with its 26sq miles of moorland, woodland, valleys, high sea cliffs and farmland, features an amazing array of open landscapes and coastal views, with the chance to spot wild red deer, be amazed by Dark Skies, and explore villages full of character. 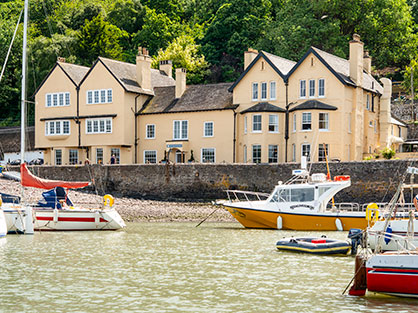 The seas around the south west are home to some of the finest seafood in the world, and the region’s chefs are brimming with passion, transforming their local produce into delicious dishes. From Brixham, the Devon fishing town that lands the largest catch in the country, to Teignmouth, the only place in England where you can try sand eels, brought ashore by one lone fisherman, there is a wealth of piscatorial delights to sample. Try the Seafront Dining Adventure at Locanda on the Weir, set in the heart of Exmoor National Park, in front of the 15th century harbour at Porlock Weir in Somerset. Italian-born chef Pio delights in creating Italian dishes influenced by the Exmoor larder and by what is ripe and ready in the restaurant’s kitchen garden.

The travel industry wants you to fly.  Why not take two holidays this year.  You probably went nowhere in 2020! Plan a trip, build an itinerary and book directly with hundreds of restaurants, cafés, pubs, hotels, B&Bs and campsites.