EasyJet expects a pre-tax loss of up to £845m for its fiscal year just ended. 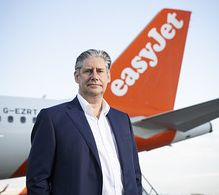 Not normally so quick in putting out ifs results it clearly wants to demonstrate to Downing Street the situation it finds itself as the UK’s second largest airline.

As a result, easyJet is axing up to 4,500 jobs, or almost one third of its staff and will operate about a quarter of the flights originally planned for the final quarter of the year.

"At the beginning of this year, no one could have imagined the impact the pandemic has had on the industry," Lundgren said in last Thursday's trading update.

"Aviation continues to face the most severe threat in its history and the UK Government urgently needs to step up with a bespoke package of measures to ensure airlines are able to support economic recovery when it comes."

Lundgren added: "This year will be the first time in its history that easyJet has ever made a full year loss."

The carrier grounded its entire fleet on 30 March as Britain went into a lockdown, returning to the skies with only a very limited schedule in the middle of June.

Industry experts noted that whilst the immediate outlook is grim easyJet’s situation at Gatwick, its largest base, is not as bad as it could be, with Norwegian not flying and British Airways only operating a very limited Caribbean programme.